When You Don’t Know Your Own Story!

When You Don’t Know Your Own Story!

It often amazes me when I start talking to people and potential clients and I hear these impactful stories that they don’t realize are stories.  I start to ask a series of questions as I would as a reporter and often what surfaces are stories that have not been told.

The reason so many people don’t know they have a story to tell or stories, is because no one has asked them the right questions. When meeting with potential consultants, you need to pay attention to the questions they ask and if they identify a story about your or your company that you have never thought about prior.

In fact, I won’t take a client on if after the first meeting I can’t find a good story or one that hasn’t been told before. In fact, I prefer to only take on clients who have several stories to tell to various audiences or at least to a targeted one.

Some stories tie into current events such as the 50-year anniversary of the 1967 Riots. Our client, AFPD has many members who lived through that time in the city of Detroit and had businesses that were effected by the riots. We shared their stories on their own platforms and with the general media.

You can hear an interview with Frank Beckmann on WJR. Click here to listen to the interview! 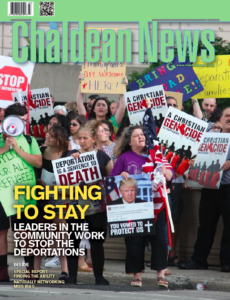 Sometimes stories happened that are unexpected. We had to stop everything we were doing at the Chaldean News mid-June after ICE detained dozens of Chaldeans who were set to be deported to Iraq. It was a story we didn’t plan on but one we had to tell at the Chaldean News. The monthly publication is its own platform and so is the CN social media pages, but we also shared the story with other media.  We wore our content creators hat and our PR hat with that story.

You need to ask: what is going on in the world today the pertains to what you have going on?

You can often tie into different events or piggy back current news stories.

In order to know what is news or identify a news story, you must pay attention to the news.

Are you reading, watching and listening to news outlets?

What is the media reporting on today?

This includes following them on social media.

Anytime you are giving back to the community, there is a story to be told. One client started a shoe donation program with various gyms and didn’t tell us about it at first but we quickly realized its story potential, so we shared it and media picked it up.