In some way or another you are a leader. It maybe just meaning leading your life in a positive direction. 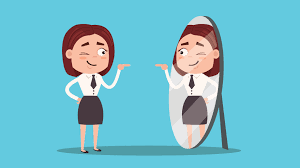 If you want to be a leader, you have to start speaking like one. That includes being a leader in your own life.

I am a firm believer that where and how you move depends on how you communicate, especially to yourself. I am coaching a client who is transitioning into a new job while coping with her anxiety. After just a couple of sessions, she realized that most of her anxiety comes from what she tells herself. “I have to get out of my own head,” she noted during a coaching session.

We walked through her messages that she tells herself on a daily basis and we labeled each with being either realistic or non-realistic. She learned through coaching that most of her fears and the things she told herself would happen, weren’t realistic at all. They would probably never happen.

Five hundred years ago, Michel de Montaigne said: “My life has been filled with terrible misfortune; most of which never happened.”

There is a study that shows 85 percent of what subjects worried about never happened, and with the 15 percent that did happen, 79 percent of subjects discovered either they could handle the difficulty better than expected, or the difficulty taught them a lesson worth learning. This means that 97 percent of what you worry over is not much more than a fearful mind punishing you with exaggerations and misperceptions.

Author Robert Leahy, Ph.D. of The Worry Cure talks about this very thing in his book. People predict the worst or they constantly think why can’t I get control of my thoughts?

Through coaching, this client began to replace those negative statements with the positive things she liked about her new job and what she was looking forward to as well as all with the reasons she got the job in the first place –what she brings to the table.

She also wrote down a list of positive things she would say to herself as soon as she woke up in the morning and what things that she is most grateful for in her life. As she started to speak those messages, her anxiety began to float away and she felt joy and peace. She even began to smile more.

How we communicate with ourselves often determines the tone of our day. Are we leading ourselves on a path of success or one of failure by the way we speak messages in our mind about who we are and what we are capable of doing that day.

In Proverbs it reads, “anxiety in a man’s heart weighs him down, but a good word makes him glad.”

You want to lead a successful life? Start speaking like a leader on a mission to be the best you can be and start speaking those positive messages to yourself.

Vanessa Denha Garmo is Communications Strategist and Coach. She is the founder of both www.denhamediagroup and www.communicationevangelist.com.